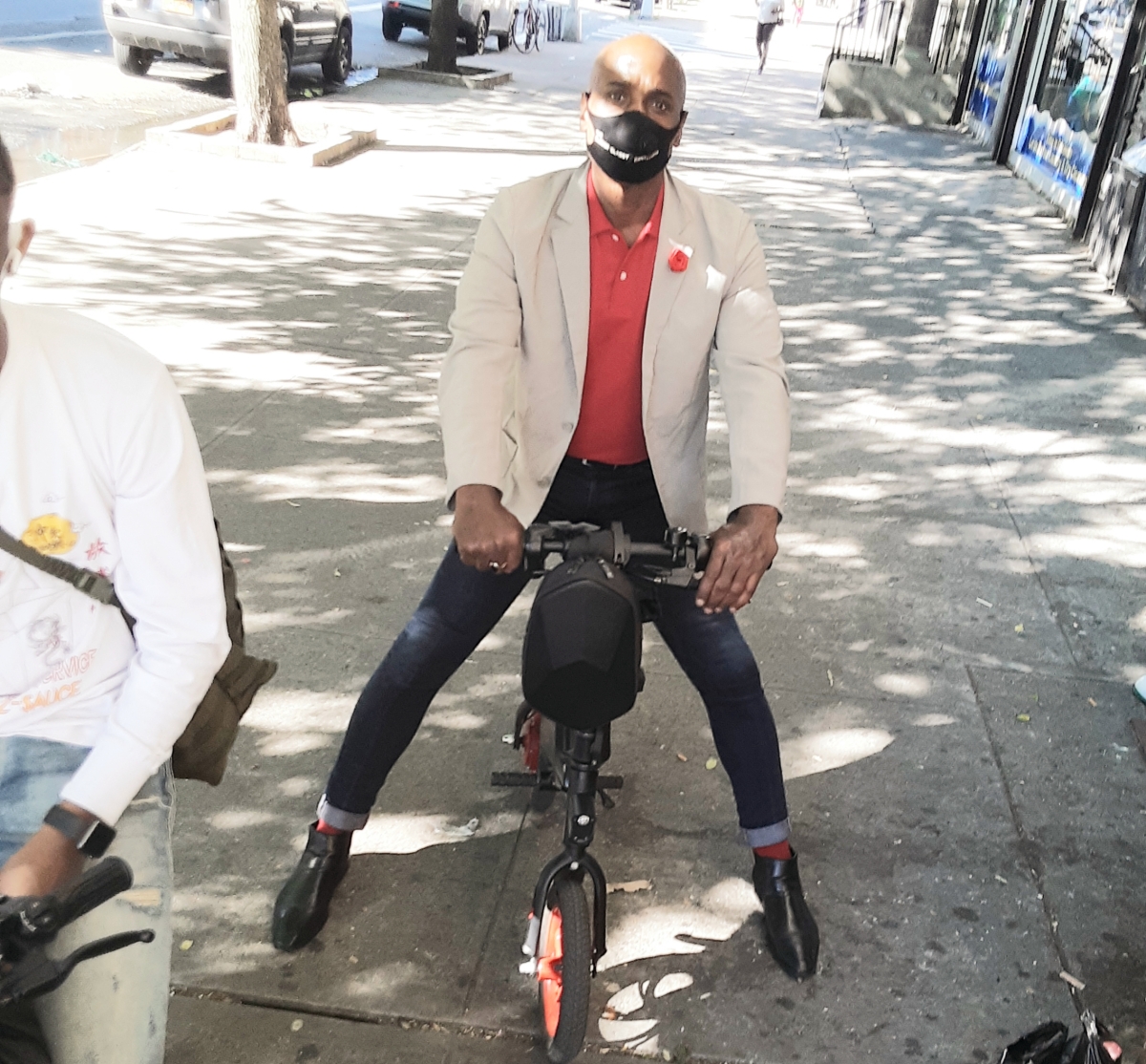 Towards the end of the Covid-19 quarantine in late May, my younger brother and I was pondering on how (while watching Netflicks) we would entertain ourselves for the coming Summer of 2020. While going over various ideas, my brother pulled out his phone and showed me a mini e-bike called the Jetson Bolt, I than pulled out my phone and showed him the same bike in my shopping cart on Amazon.

Realizing that we both had the same idea independently, we immediately began to plan for reducing our carbon footprint (I made a commitment to protect the environment along with sustainability) utilizing clean energy for urban transport. Sounds exciting…..doesn’t it?

So before dipping our feet into the whole thing, we did our due diligence (watching review videos, and reading customer reviews who had purchased it) and decided that the best course of action was to purchase used/refurbished bikes to test the speed, performance, battery life, distance and kinks.

We ordered two refurbished bikes for about $130 less than brand new bikes from a company called Hypermicro Systems. In about two weeks the bikes were delivered and we excited to start testing the bikes. Opening and setting up his e-bike first, my brother’s e-bike did not work out of the box. I on the other hand unpacked my bike (which almost flew out the window, as my hand was on the throttle) and found it in working order.

So with only one working e-bike I took if out for a run, while my brother repacked the non working one to be shipped back for replacement (we purchased a two year warranty on both bikes) and contact the insurer foursquare. We purchased the bikes on E-Bay.

I was able to reach a speed of about 17 mph, with a hydraulic rear disk brake I was having the time of my life! I found myself taking it out almost everyday (yes I did share the bike with my brother) when my brother wasn’t riding it. When the warranty company got back to us, they said something about contacting Jetson for replacement (but we purchased it from them, not Jetson), so we returned it through E-Bay and purchased another from Hypermicro Systems, once we received the refund from E-Bay.

When my brother received his 2nd bike (about 2 1/2 weeks later) we have already been riding around the Bronx and Harlem like crazy (but now we can ride together) which lasted for about three weeks, when my bike suddenly stopped working, and getting the same non service from Foursqaure I returned it through E-Bay got my refund and decided to Purchase a “Brand New” Jetson Bolt from Jetson itself.

I purchased a rear basket and affixed a bottle/cup holder on my new “Bolt” and my morning commute was never the same. The Jetson Bolt is easy store (handle bar folds down) and has a built in carrying handle, with the bike weighing only 35lbs. You get about 2 1/2-3 hours on a full charge and with the app I was able to increase the speed to about 19 mph.

However with a maximum distance of only 15 miles (more like 13) on a full charge I got some front bike bags to carry the charger, to charge on the go if we found ourselves riding longer and not wanting to carry it on train when we ran out of power. But to satisfy the craving for longer distance riding, we discovered Wheels!

We had Wheels deliver our E-Bike Rentals and haven’t looked back. Wheels can go over 22 mph and a distance of 30 miles on a full charge, and comes with built in LED lights on the side, Bluetooth speaker to play music and GPS anti-theft tracking system and the best feature is that only you can turn on the bike with your phone via a QR code.

Whenever we were out riding (everyday) people would flag us down to ask about, take a picture (gather info) about the bikes, and as the weeks rolled along we noticed other people in the Bronx and Harlem with the bikes that we had first, and are still riding.

Now we have upgraded and are riding the Wheels 2.0 which has move safety/anti-theft features and comes in all Black. So far I have seen only one maybe two 2.0’s riding in Harlem. I myself will most likely be riding till mid November.

Come and join us in the E-Bike Revolution!

On Saturday September 12th I attended one of the very few fashion week shows that you actually could go to in person, as almost every other fashion houses opted for digital runway shows. so late in the afternoon I find myself on Bleecker Street in NoHo.  SBFW’s Gallery fashion week show in it’s 18th season put on a show formatted in a….gallery. 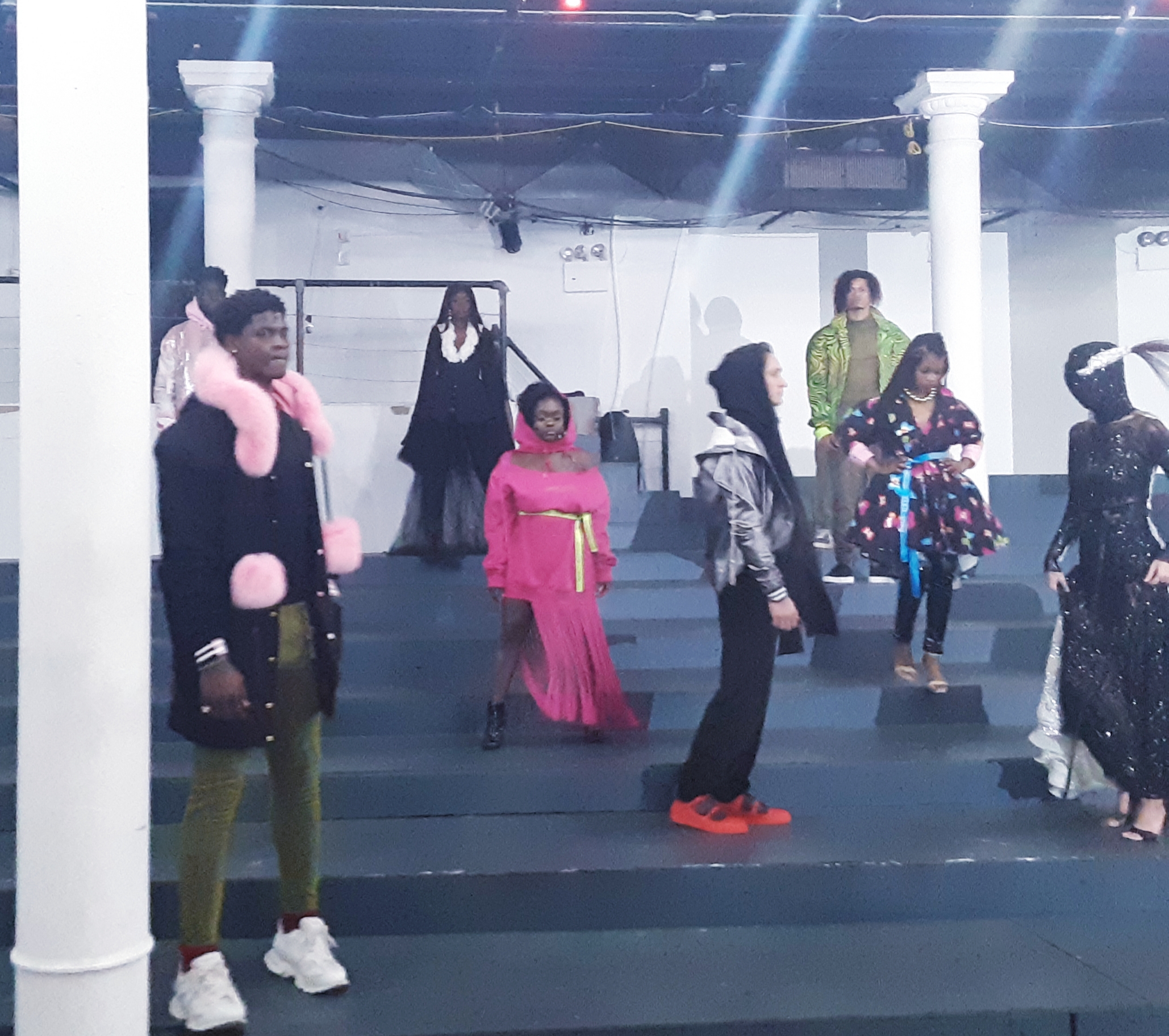 The mostly press audience (including myself) remained in social distanced metrics as was the models (not on a runway) on a wide angled stepped stage platform, and changed positions seemingly at random. 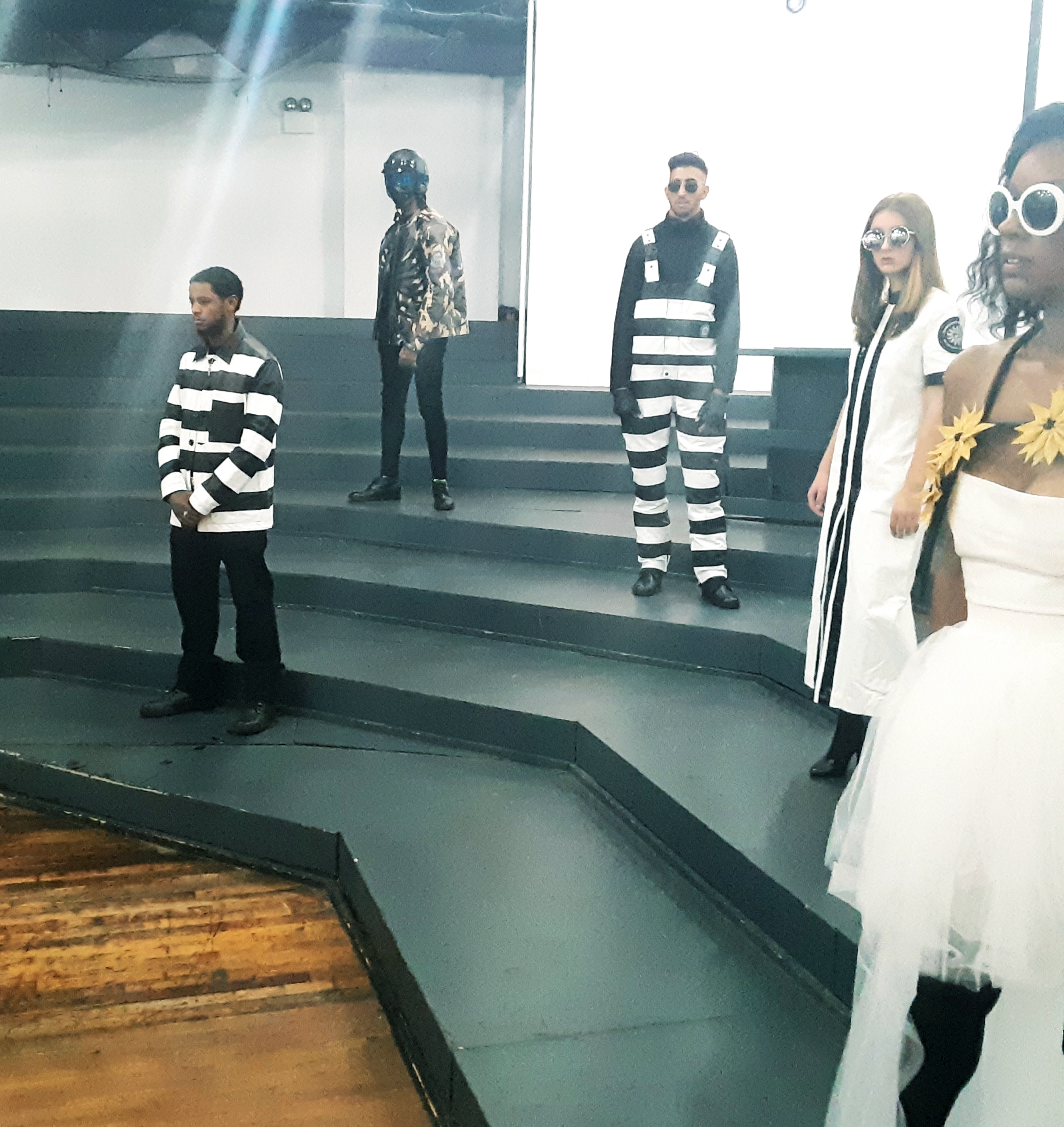 While I did not know what the designers were going for, the individual style was intriguing and quite different. 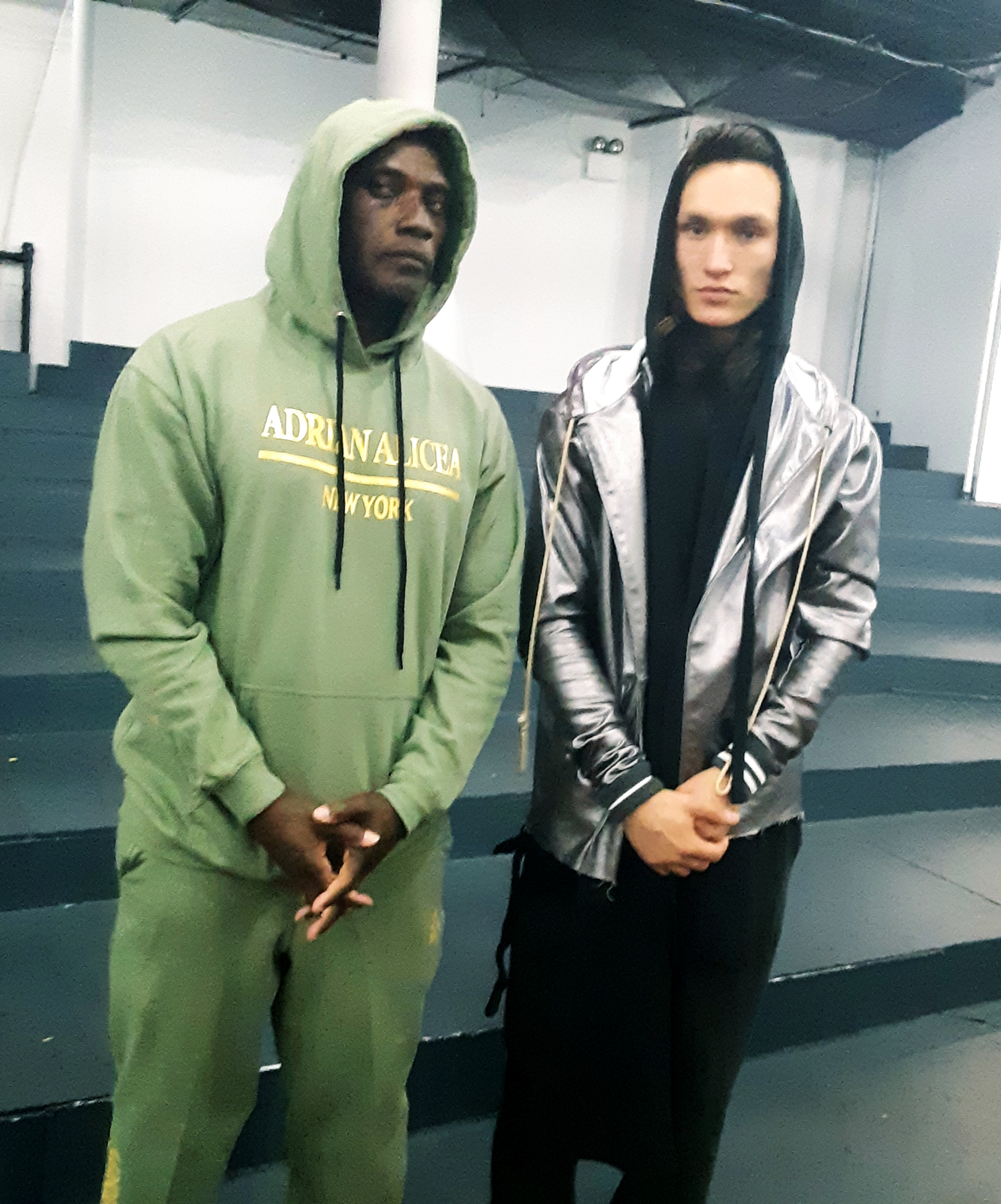 Interesting street style was also part of the montage of styles moving around and up and down the platform Steps.

I was only able to catch the 2nd show from 4-6pm, but it was well worth it.

After the show I mingled a bit with some of the models and vendors, than I mounted my E-bike and took of on Bond Street. Time to find a good place to eat fin these “Strange Times”.

On Wednesday LVMH backed out of the $16 billion buyout deal to acquire Tiffany & Co that was announced last November as the biggest luxury purchase in history. Citing tariff issues and the Covid-19 pandemic luxury downturn. Tiffany filed a lawsuit against LVMH to force the buyout contract. The deal may still go thru, but at a much discounted price or Tiffany & Co may search for another buyer in a hostile economic climate.

A Statement by LVMH on Wednesday said: “it could not complete the deal with Tiffany as it stands”. LVMH only excuse was a request from the French government via a letter to delay the deal till Jan 6th 2021 to avoid U.S. tariffs on French products.

Tiffany cites in it’s lawsuit that LVMH has not produced an original copy of the letter from the French Government. Second quarter sales for LVMH fell 38% while Tiffany’s net sales fell 29%. On Thursday LVMH countersued Tiffany’s with mismanagement and violating terms of the deal. 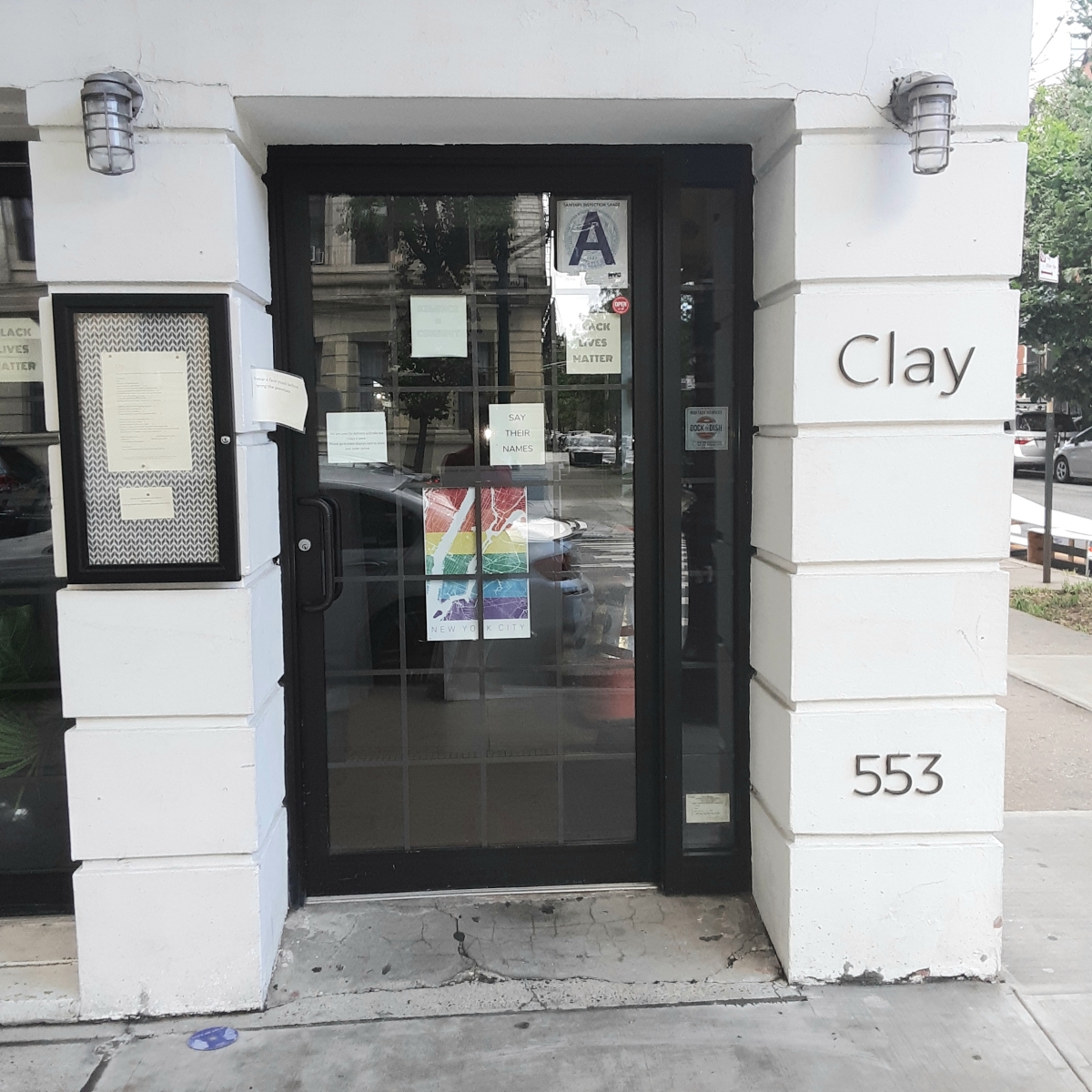 Sometime around the end of August, I was riding one of my E-Bikes and found myself passing by (quickly riding by) Manhattan Ave & 123rd Street in Harlem. Struck by the post modern rustic building structure (Think New Amsterdam late 1800’s/SoHo 1984), I hit the breaks and skidded to a stop and beheld an oasis out of time (and low key out of place) tucked neatly away in Harlem!

As I walked up to inspect the menu posted in the glass enclosure on the wall, I could not help but be reminded of one of my favorite restaurants near Murray Hill….Craft! (yes….that’s it!). While I was unfamiliar with the offerings on the menu, I was also intrigued by the combination of the  ingredients on quite a few of the dishes.

Gabriela Davogustto (one of the co-owners) approached me, and I commented on the my thoughts (and the menu) and simply had to do a review of this (low-key elegant) lovely restaurant. She graciously invited me back to do so with some hidden excitement, and off  I went on my e-bike to Lenox Ave. I returned a couple of day’s later and Andrea Needell Matteliano, the other co-owner (and bar director) and I had the pleasure to meet (and when she had a moment) as well as answer my questions regarding the establishment.

I chose the table on the cut (the corner of building itself) which made for a great aesthetic (and excellent position to people watch) angle which increased the sense of being in another place in time and space folded into these limited confines.

While they didn’t have my customary chardonnay, Andrea introduced me to a delicious white wine Guimaro/Ribeira Sacra 2018 (not chardonnay) that I really liked!

Not quite sure what to have, I enlisted the help of my waiter who pointed me in the right direction with the appetizer: Roasted Beets (“what their known for”) which at first I was a bit intimidated (I admit) being made with pickled jalapeno, shallot, orange, yogurt, and pistachio granola. Well it time to try something new! And he had me at yogurt.

When this dish was placed before me by the server (who seemed to appear out of nowhere) it seemed to be a mix of nuts, and beets with orange slices (a solid V-8). But when I put the first forkful into my mouth a cascade of flavor exploded on my palette, and I become a fan for life!

For the entrée, I had the Black Sea Bass: (since it was Friday, I was feeling classic) served with roasted root vegetables, celeriac puree, and charred radicchio. 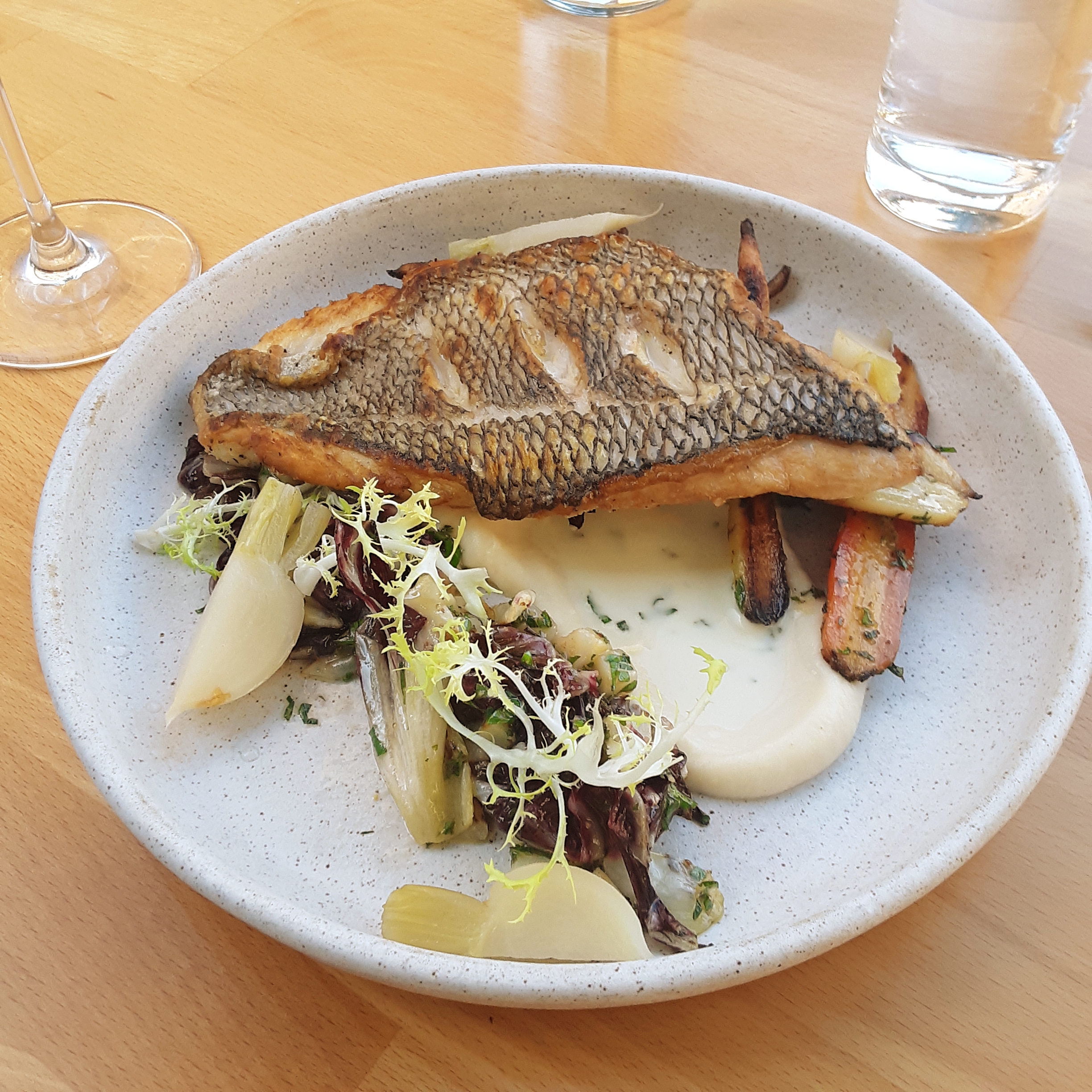 This dish was quite enjoyable and just by looking at it (and tasting it) you could tell that it was made with great care. This complex yet simple dish was elegance on a plate, you just could taste the “farm to table” freshness, and I was very pleased with the unique culinary craftsmanship of both my dishes which made for a very classy dinner indeed!

Clay is located at 553 Manhattan Avenue in Harlem, in that elegant angle of space and time folded on the corner of West 123rd Street! A quite romantic place to go for dinner with a date as well as alone, you might end up falling in love with the fact that you dined there!